In many ways, street food is the forefather of grab and go and its recent rise in popularity merely demonstrates how the movement has now come full circle. You need look no further than the ready meal sections of your local supermarket or the QSR (quick service restaurant) industry for evidence of street food’s widespread appeal. Therefore it will probably come as no great surprise to learn that, during the past year, the market share of chilled pre-packed sandwich products has fallen 6% while hot food sales have risen (2.4%) from around one in every 16 food to-go items purchased to nearly one in 12. And the main driver behind the shift: the rapid growth of the street food market - or the 'Street Food Boom' as we like to call it

Street food style offerings typically take a more flexible approach to mealtimes by making a range of takeaway and grab and go options available throughout the day. So it makes sense that takeaway beverage sales have grown in line with this too, increasing their market share from 8% to 10% - that's up from around one in twelve purchases to one in ten. The reason being? When consumers can access food to-go at any time of day, the window for sales is laid wide open meaning that the number of purchases an individual makes is likely to go up. And, if consumers are buying more grab and go food items, they are more likely to pick up a beverage at the same time. Or, alternatively, a standalone hot chocolate or coffee to tide them over - driving up takeaway drinks sales too.

As we've already mentioned, over the past year sandwiches lost a 6% slice of the food to-go market but rather than falling foul of the change, the sandwich industry has been invigorated by the trend. And while the popularity of pre-packaged sandwiches, rolls and wraps may have dipped a little, they still lay claim to almost two thirds of the entire grab and go market and really won't be disappearing any time soon. For one thing our bready friends can so easily accommodate many of the leading street food trends. What’s more, for every hot grab and go item sold (around one in twelve items purchased or an 8.5% market share) made to order - often street food-style sandwiches - have an almost equal market hold at 8%.

Like sandwiches, consumer demand for pre-packed salads has dipped. Their market share is down 3% on the previous year, so that takeaway salads now amount to just one in forty grab and go purchases. Or, to put it another way, the average consumer is 25 times more likely to choose a sandwich than a salad-to-go. Snacks on the other hand, have remained consistently popular with baked treats accounting for around a sixth (16% of) out of home purchases.

So sandwiches have a lost a little ground (or perhaps space in the chiller is more accurate) but they still dominate the grab and go market big time. What’s more, if you offer baguettes or subs you should be on to a winner because they really are by far and away the most popular sandwich carrier. In fact we estimate, that in the last year alone, almost half (46%) of all sandwiches sold had a French stick or sub base. Because one fifth of the entire grab and go market is dedicated solely to baguettes exceeding the popularity of hot food choices more than seven times over. This is no flash in 'du pain' either - baguettes have been the most popular bread for some time and over the past twelve months upped their grab and go market share by another 2%. Why? It's something we're calling the 'Baguette Effect' because, quite simply, consumers LOVE a baguette sandwich. They represent quality, taste and value for money - not to mention a touch of continental chic - and when it comes to baguettes it's also kind of hard to go wrong. 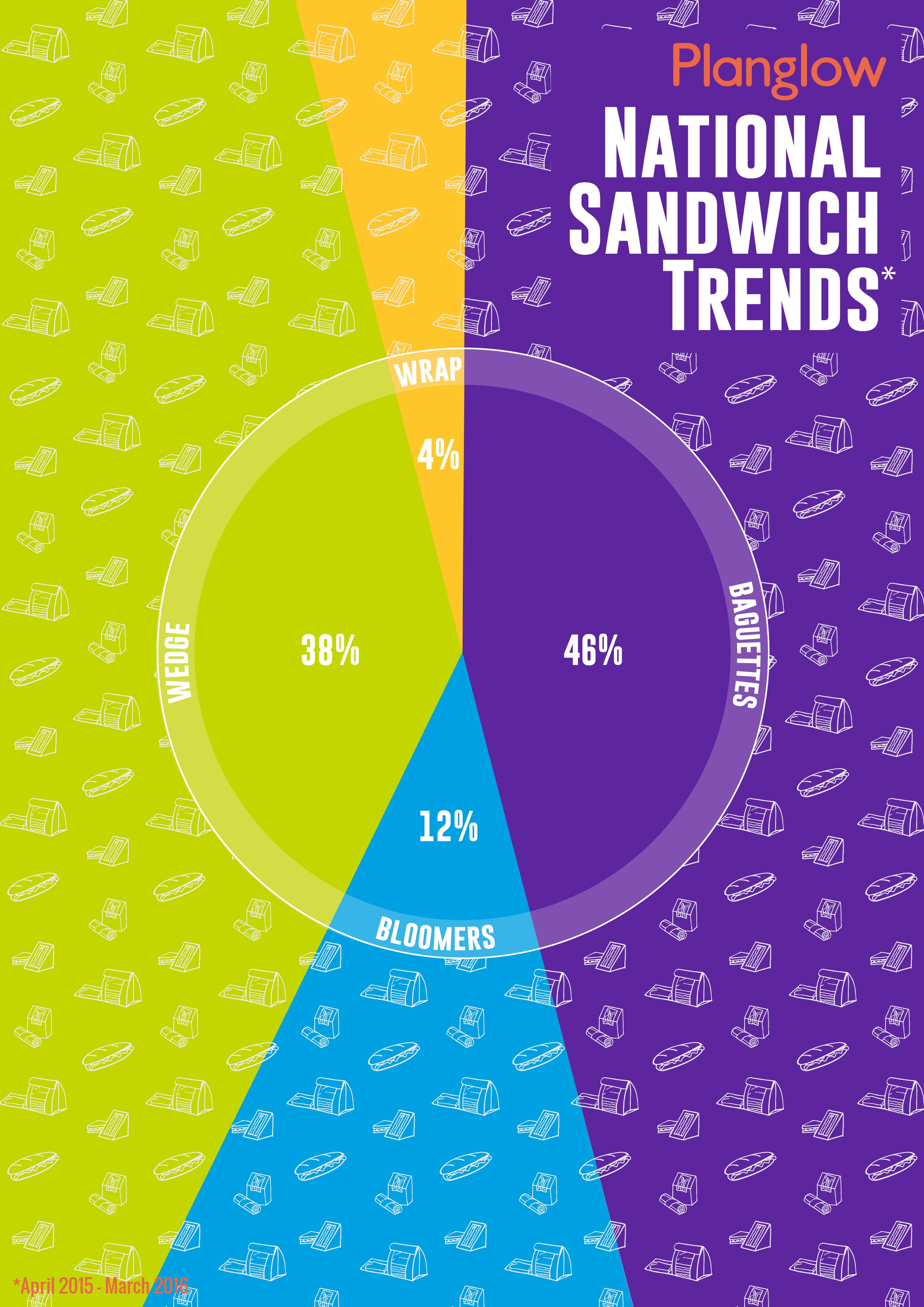 So what about other types of sandwich we hear you ask. Well, like baguettes the classic sliced bread triangular-cut wedge has shown a 2% increase too and now lays claim to well over a third (38%) of the total sandwich market. Wraps - most commonly tortillas - have remained level at 4% - that’s one in every 25 sandwich purchases - while square cut sandwiches typically utilising bloomers and other speciality deli breads have dropped from one in six sandwiches consumed to one in eight.

While most food movements apply to everyone, broadly speaking, there are of course some localised differences. Below is a quick snapshot of some of the key regional trends:

Equalling 52% of all sandwich sales in the region, Scots are the biggest consumers of baguettes and subs

In the West and South Wales, baguettes have their lowest market share - 46% of the regions sandwich sales 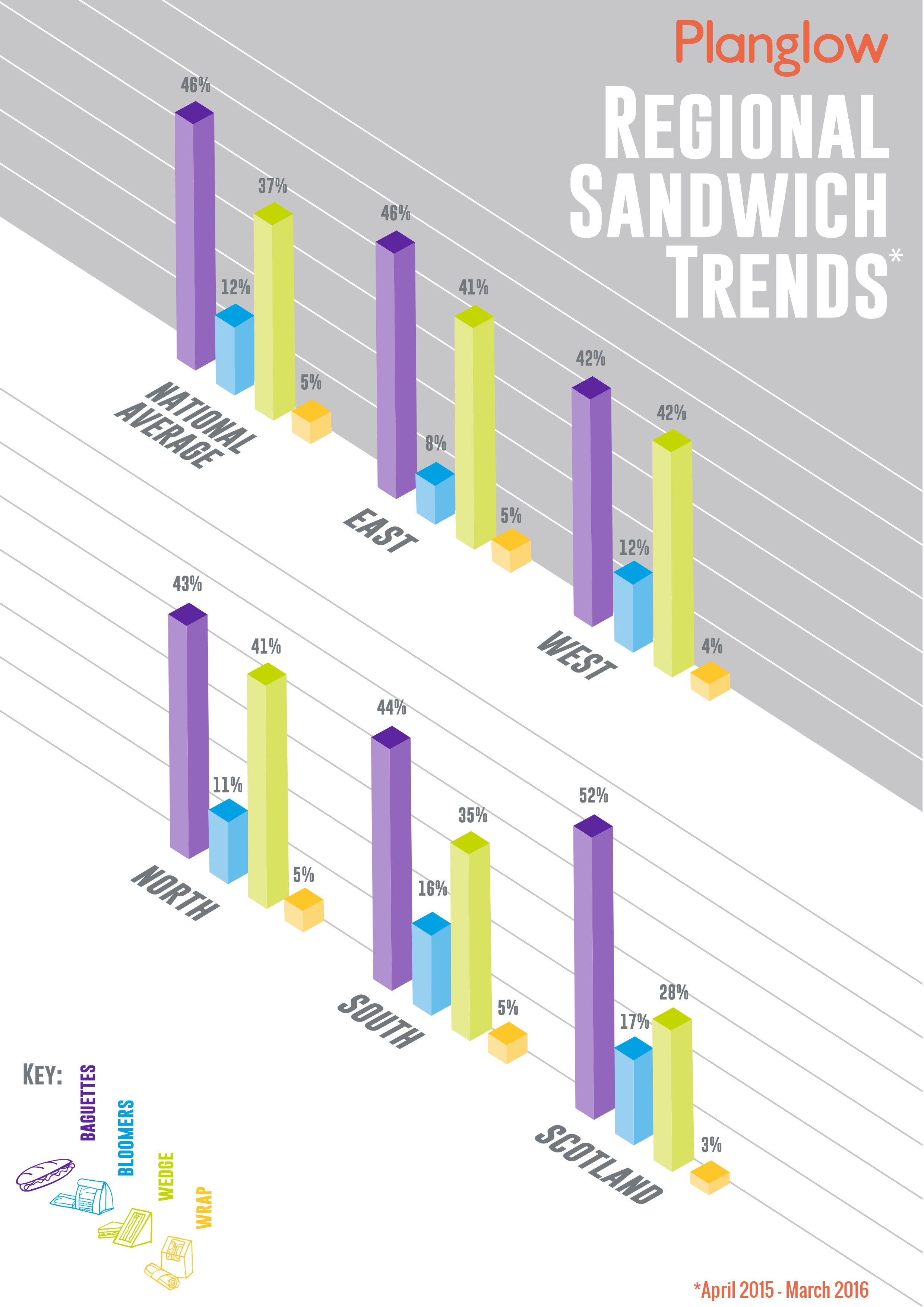 However, Scotland’s hot food to-go sales are the lowest in England, Scotland and Wales combined - at 6.4% of the market they equate to around one in every 16 purchases

Consumers in the West of England and South Wales drink the least takeaway drinks - one in every 23 purchases (4.4%) but consume the most hot food on the go - 10.4% or one in ten purchases. 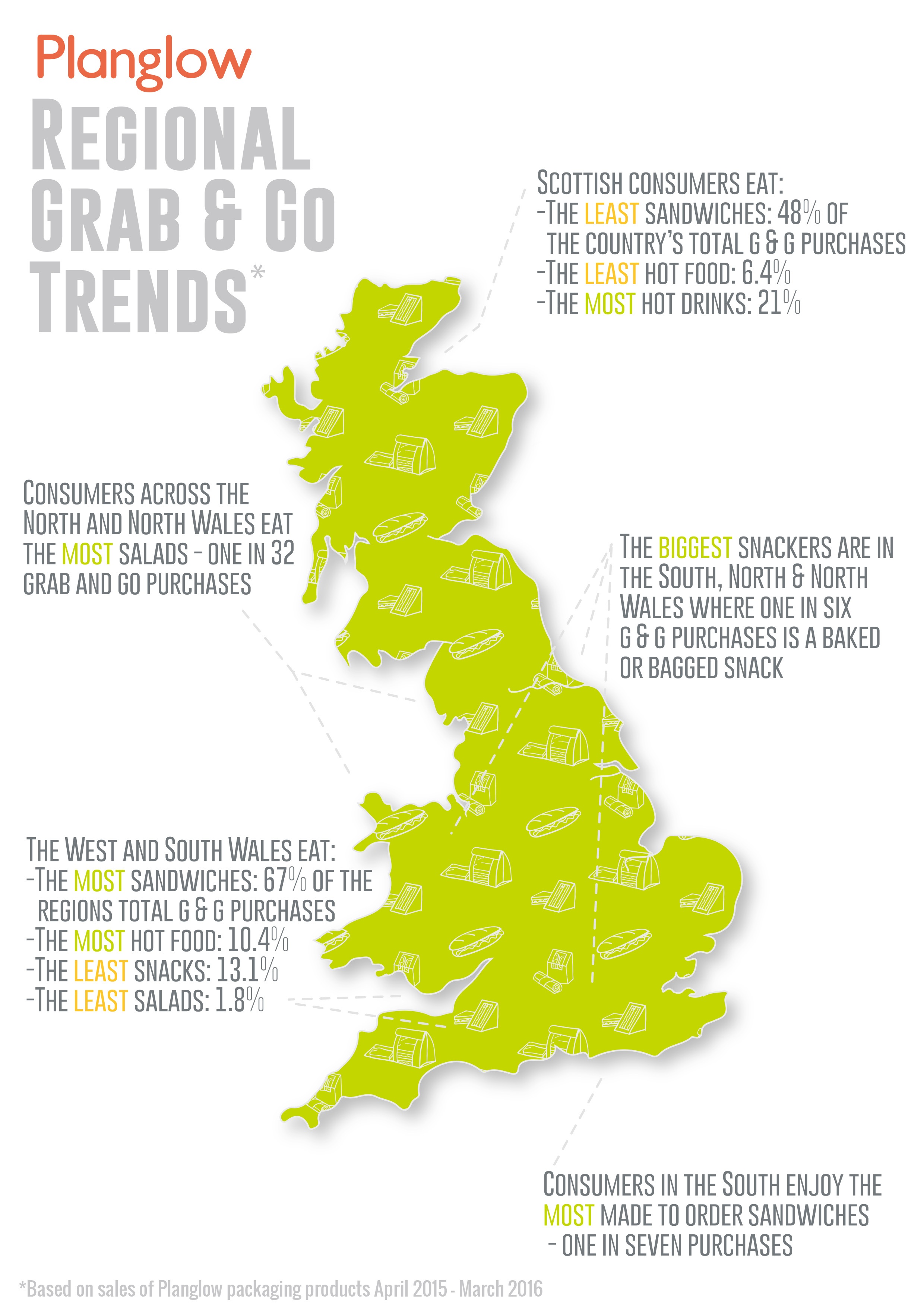 Ultimately you know your customers best and what they want to see in a grab and go offering. If however you felt like trying something new a sizzling street food sub sandwich and takeaway drink combo should go down a treat!!